When you were waiting for panic purchase at 0 o’clock, a brand made a new record of 2 million+ views in 4 hours

BESTORE is today’s protagonist. Though the clean sweep they have made on the Double 11 Shopping Festival is worth recording at length, an emotional marketing of BESTORE before the official start of the shopping festival is what attracts me most.

At 8:01 p.m. on November 10, 2018, while customers were finally confirming their shopping carts, e-commerce businessmen checking various settings of the platform, and brand operators waiting for the real-time data to make time points of supplies, the Official Weibo of BESTORE released a set of posters called “Show pity on e-commerce businessmen for a second”, which, by the deliberate copywriting and tender painting style, poked the pain points of countless e-commerce businessmen and quickly attracted the public’s attention. 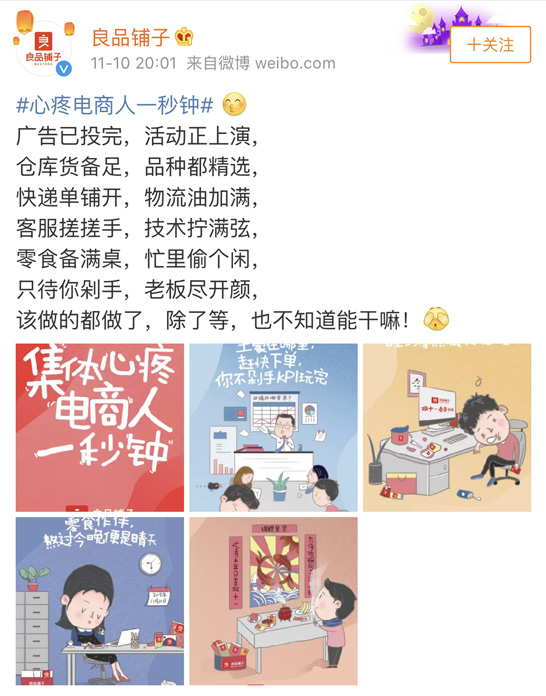 Why can this set of posters flood the screen at the moment when the shopping boom of the whole people is rising? I want to make an analysis from the following aspects.

As the Official Weibo of BESTORE said, it was the moment when everything had been ready at 8:00 p.m. on November 10. All preparations that should be made were basically done, the same case for either businessmen or customers. 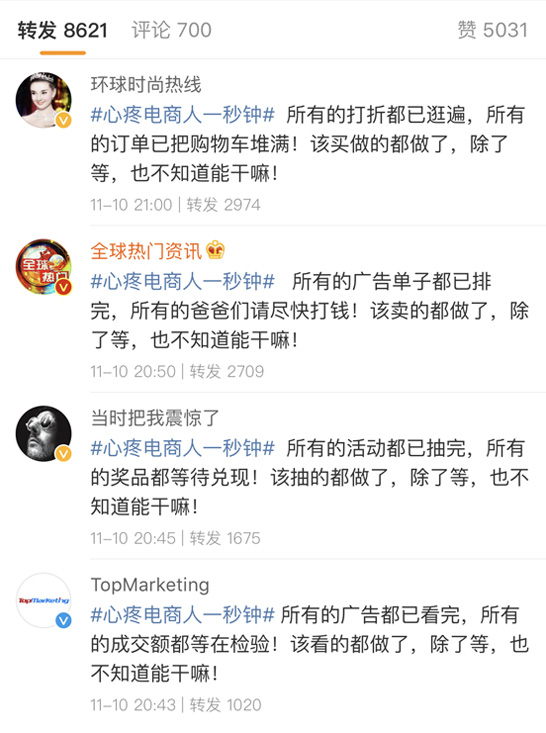 While all people were at a state of waiting for 0 o’clock, any content related to Double 11 Shopping Festival may trigger customers’ forwarding enthusiasm.

However, it is worth mentioning that content producers rarely make any content other than shopping strategies at this moment and e-commerce businessmen working overtime will only pay attention to the e-commerce platform; therefore, on the social network on the eve of the shopping festival, new information can rarely be seen. The unconsciousness of the majority creates a vacuum time full of enthusiasm but without information to be consumed.

Therefore, it is not difficult to imagine that BESTORE, such an official account with its own attraction, floods the screen with a set of posters combining deeply with the topic of Double 11 Shopping Festival.

Wining 8,000 times of forwarding in a short period, BESTORE had grabbed every second on the eve of the shopping festival, proving by actions that to flood the screen, nothing is impossible.

Focus on the neglected group; strike a chord by heartwarming posters

Of course, we must also admit that customers had been bombarded by the relevant information of the Double 11 Shopping Festival for nearly a month. On the eve of the shopping festival, even at the moment of information vacuum, not all information can produce a screen flooding effect.

Here I can’t help but mention the posters called “Show pity on e-commerce businessmen for a second” made by the BESTORE. 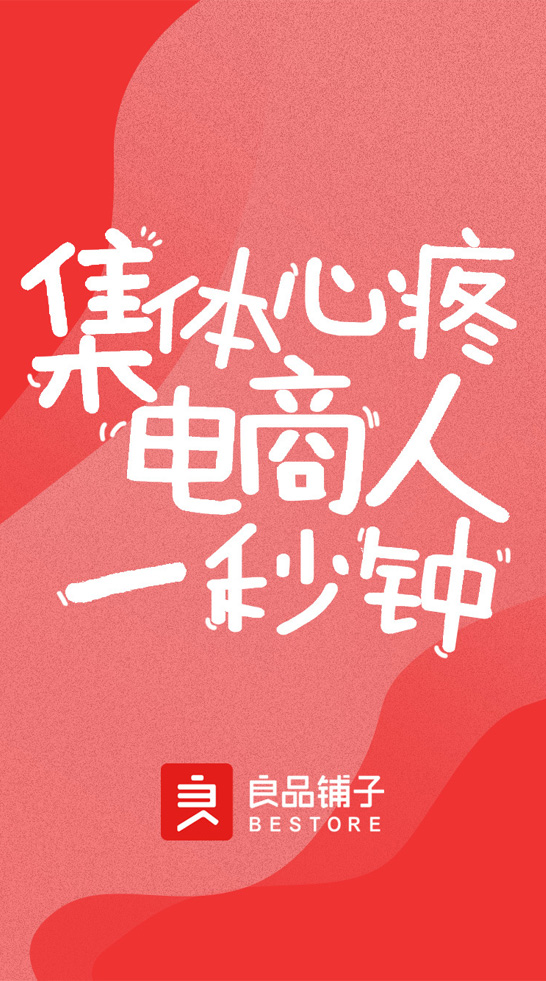 This year, the number of brands participating in the Double 11 Shopping Festival was as high as 180,000. Behind the customer festival was the overtime work for several months of the brands, operation & maintenance, and logistics related personnel.

BESTORE made a record of what the e-commerce businessmen were like using a paintbrush, thanked them for their efforts with the heartwarming copywriting, and imagined the good life after the Double 11 Shopping Festival in an expecting tone, the gentle color hitting every e-commerce businessman who was enjoying the last leisure time. 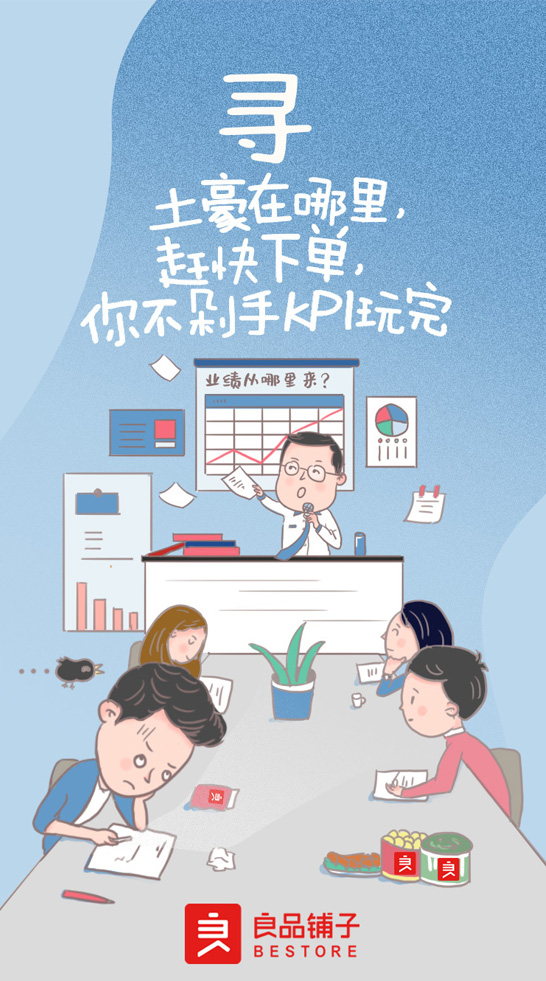 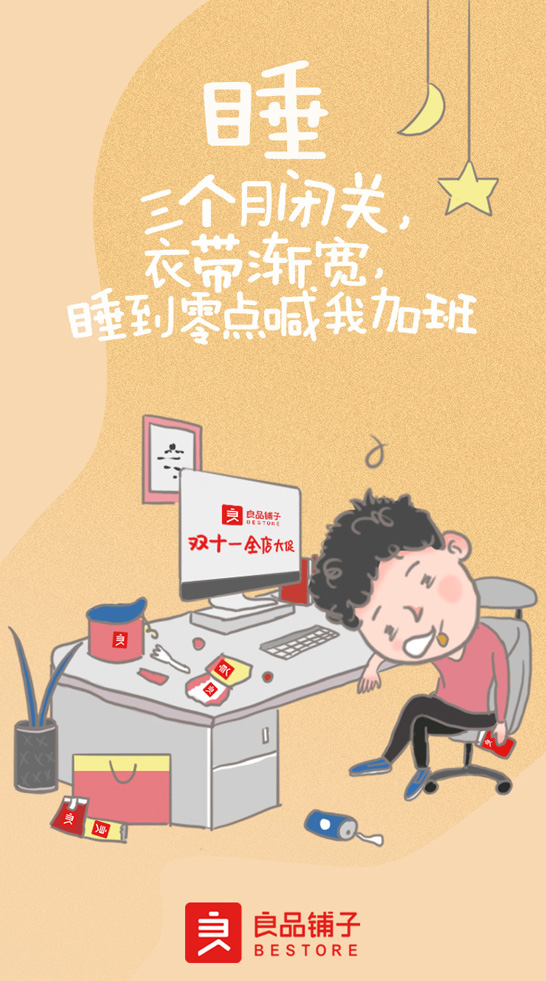 From Weibo to Moments, starting from this Weibo post, numerous e-commerce businessmen unanimously told about their overtime history.

Self-deprecating, optimism, trusting to luck, worshiping the lucky Koi... The roast of e-commerce businessmen continued to spread, striking a chord throughout the whole industry.

And when a large number of e-commerce businessmen became seed customers, the spread of this Weibo post was not hard to imagine.

On the eve of the shopping festival, there must be both reputation and sales volume

The e-commerce businessmen that BESTORE thanked also surly included its own staff. The characters of the posters were exactly the true portrayal of BESTORE employees.

On the evening of November 10, during the time when the Weibo post was issued, BESTORE employees were enjoying their last leisure time as presented in the posters.

The interaction of the “Show pity on e-commerce businessmen for a second” and the dinner on the eve of the Double 11 Shopping Festival were originally the group’s concern for its own employees, for whom the group’s recognition and encouragement would let them devote all energies to the coming battle.

To outsiders, this communication was also an effective brand promotion. Combined with the fact that BESTORE offered consultations for nearly 500,000 customers and the service satisfaction rate was as high as 93.3% on the Double 11 Shopping Festival, it become part of the brand equity.

In addition, under this Weibo post, the nine-flavor Stars Crisp specially launched by BESTORE for the Double 11 Shopping Festival was also presented unexpectedly, becoming a strong attraction depending on its interesting design and exquisite packaging.

Wining more than 2 million views in four hours is inseparable from BESTORE’s attentive operation of social networks. At the same time that the relationship between the BESTORE brand and its customers enters the stage 2.0, the brand becomes more accurate in grasping the current SNS dynamics.

Selecting Koi in “BESTORE”, embedded advertising, brand alliance... among all kinds of popular marketing methods, we can see the figure of BESTORE.

This time, the posters of “Show pity on e-commerce businessmen for a second” also maintain their consistently high standards- particular angle, self-created hotspots and fast releasing, naturally triggering hot discussions in a short period of time

Companies using Internet marketing methods should also be aware of the current context of communication, and seize any opportunity to flood the screen, like BESTORE.

In addition, the screen flooding on the eve of the shopping festival has a special meaning for BESTORE. Under the marketing by this year’s shopping allowances, snacks such as those produced by BESTORE are suitable to be the favorite artifact for order sharing. This emotional marketing has greatly improved the exposure of BESTORE. Next, when troubled by order sharing, customers will definitely think of BESTORE in first time.

This year, have you placed an order in BESTORE?